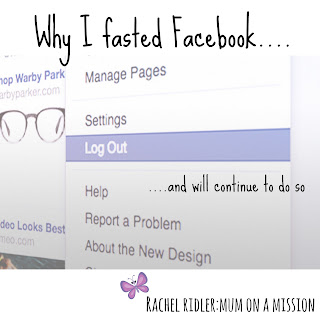 This weekend I conducted my first ever facebook fast.  You know the drill – giving up social media for a certain amount of time.  Normally conducted by putting a long ranty post on facebook about how social media is evil and taking over your life and everyone talks drivel, etc etc.  And then bookended by a post saying how amazing your facebook fast was but now you are back and the world can rejoice!  Yes, you know what I’m talking about (even if you don’t want to admit it!).  Some of you may have even done one during lent, or another time when social media started to get the better of you.

Well I did my first one this weekend.  Except I skipped over the ranty post and celebratory return (although I guess you could call this post something like that….).  I do not hate social media.  I even wrote a whole series of posts about how great social media can be in connecting people, building relationships and reaching out to those we may never meet in real life.  But over the last month social media has become too much for me to handle.

It has become something I check every second of every day, or at least think about way too much.  It became the first thing I check in the morning and the last thing at night.  I was checking it instead of playing with my kids and whilst I had guests round.  I was checking it at work and it was starting to take over.  I was worrying about things that were happening on groups I was admin over, and I was having messenger requests coming through late into the night.  It was a little bit out of control.

A fast is normally when you don’t eat for a period of time, and instead use the time that you would have eaten to pray and show your dedication to God.  Sometimes we fast when we need to spend more time with God over a serious issue, but to be honest it should just be a normal part of our lives to pray and fast every so often.  Food can be such a controlling factor in all our lives, which is why God places such a big importance on it – that to be able to concentrate on God and place importance instead on our relationship with him, we need to sometimes not have it.

I know facebook isn’t the same as food, but actually in our society now I think there are some of us who could survive longer without food than without facebook.  Some of us are constantly checking our phones like it is the oxygen we need to survive.  And for that reason I think there is value in fasting from facebook.  It is showing that God is more important than facebook.  As long as we fill the time that we would have spent checking it with praying then that is a valuable fast to God.

I also took this time away from facebook to prioritise time with my family.  To really enjoy those moments rather than trying to photo them for facebook or missing them by being on my phone.  And it was so refreshing and enjoyable.

From now on I am going to try to limit my facebook checking to a few key points each day.  Maybe like my tea breaks.  And regularly take full days away from checking it.  Because actually you won’t miss something life-changing because you haven’t checked facebook (the news feed will still be there in an hour!) but you might miss something life-changing whilst you are checking facebook.