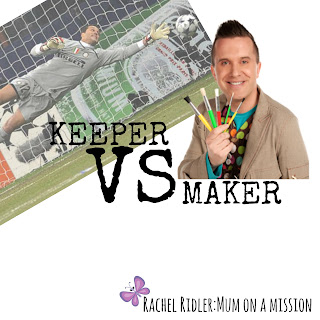 OK, so to start off with I want to apologise for today’s graphic! I really don’t like Mister Maker, but trying to google maker didn’t come up with anything else useful so I guess I went with what I knew!!  Before we launch into this week’s Mummy Meditation, please do check out last weeks called “Be Still” as I particularly enjoyed it.

“Blessed are the peacemakers, for they will be called children of God” Matthew 5:9

Last week I mentioned about having to step up to be a peacemaker in certain situations and that when I felt conflict rising, God kept reminding me of this verse.  Blessed are the peacemakers.  Blessed are the peacemakers.  It was like a chant I had to keep me going when being a peacemaker was the last thing in the world I wanted to do.  What I really wanted to do was to smash my computer with a sledgehammer and curl up in my duvet to hibernate until everything had passed.

But that is not who I am, and as a catalyst for God (check out my flashback posts from last week) I know I won’t actually do that.  So I got stuck in and quickly realised that there is a big big difference between being a peaceKEEPER and a peaceMAKER.  Lots of other blogs and authors have touched on this, but I wanted to dig deeper for myself, so I looked up the two words:

Keeper – a person who guards or watches

Maker – a person who causes to exist, happen, or who brings about and creates

Now I want you to think about something.  How often does peace ACTUALLY exist in our world?  I know we like to think that since WW2 our world is conflict free, but after googling “is our world at peace” I came across an article that says only 11 countries in our world that can actually be considered conflict free.  11 countries out of 162. Thats pretty poor.  And how many days do you have some kind of argument or disagreement with someone?  I would say probably most days!

So to me that makes the word and job description “peace-keeper” null and void.  How can you guard or protect something that doesn’t actually exist in this world as we know it?  It makes it sound like peace is the precious thing that we are chasing after and guarding the last remaining fragments of.

But what if we thought of peace in a different way.  What if we accepted that peace is pretty scarce in our world, but that we had the power to CREATE it.  To be a peace-creator, peace-bringer and peace-maker.  To do that we have to accept that there will be conflict.  We have to not be scared of the conflict, but allow God to work through it and ourselves to bring about a lasting and meaningful peace.   Not a pretend peace where things are swept under the carpet, but a real peace where issues are dealt with and problems over come.

God is the one true peacemaker, as he accepted the conflict between man and himself, and instead of pretending it wasn’t there or trying to protect any last remaining hope of it being there, he did something about it.  He stepped in and CREATED peace by sending his son Jesus Christ to die on a cross in our place.  He dealt with the conflict and came up with a solution, and now we can look him in the eyes and know there is nothing swept under the carpet, no skeletons in the closet and nothing that might come up again to ruin that peace.

And that is why when we seek to make peace and not just keep it that we can be called children of God.   Because we are following in our Father’s footsteps.  WOW.

I don’t know about you, but I want to follow in the footsteps of my father and be blessed.

Loved me a bit of the sermon on the mount last week, so thought I would carry on with this amazing verse:

“Let your light shine before others, that they might see your good deeds and glorify your Father in Heaven” Matthew 5:16

(p.s. it would be really useful to read Matthew 5:13-16 for the full context of this verse)