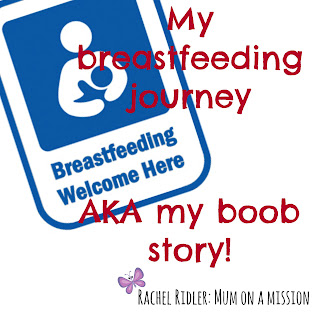 This week I got a text to say I had received my final £40 breastfeeding voucher for completing 6 months feeding with Reuben.  And it got me contemplating what a journey and road I have been on with it all!  I am sure every single mother has their own story to tell about this, and here is mine.  Enjoy!

Everyone told me that breastfeeding could be tricky, and I thought I had prepared myself for it, but I wasn’t.  I really wanted to feed my firstborn naturally (not only for all the benefits that you get told about, but also to save money – with a student for a husband and maternity pay we didn’t really have much going spare!!!).  The first few days were difficult.  Because of my 36 hour labour, I had had two injections of diamorphine which made Sam come out really sleepy.  Great for getting post-labour rest, but not so great for getting him to figure out the whole latching on thing!

By day 3 we had managed to figure out some sort of feeding (I mean – he wasn’t going hungry all the time!).  But that was when one of my nipples started to get sore.  Sam had this fun game of shaking his head at my nipple instead of latching on to it, so we were both getting frustrated.  Especially when it came to feeding off my sore side.  The constant latching on and off was agony.  I spoke to the midwife visiting and then a health visitor the next day, but they all seemed to think that he was latching on fine.

By day 7 my nipple was infected – yellow puss and everything!  I was in tears by the time to midwife came to visit, ready to pack it in but too scared to do it without the midwife’s approval.  We chatted it through and agreed to try out pumping and giving Sam expressed milk.  I was so relieved to not have to try to latch him on to my sore side again.  It was almost life changing at the moment (the night before I had been in floods of tears whilst we had lots of friends from Rob’s college round and probably put them off motherhood for life – sorry girls!!).  The next day though I felt so guilty – my mum had bought me special breastfeeding clothes and I wasn’t going to need to use them.  I felt so wasteful.

I managed to pump and feed Sam for 6 weeks which was great, although very time consuming and strange to feel like a cow being pumped for milk!  It was nice to be able to let Rob do some of the feeding too, especially at night where we were able to alternate and both get a bit more rest.  But by 6 weeks my supply couldn’t keep up with demand, and I was going back to work, so we transferred Sam over to formula and never looked back.  I was so glad that I was able to give Sam breastmilk for those first 6 weeks, but I really do not judge or think any less of people who can’t or don’t want to.  It was an emotional and physical rollercoaster!

So when I got pregnant with Reuben I was all prepared for the potential craziness that breastfeeding might bring.  And I was more realistic that we would just feed him however suited our family.  If I was able to feed him myself then great, but if not we wouldn’t sweat it.  We would need sleep and strength to cope with two, and I would do whatever I needed to to get that.  I even contemplated investing in one of those magic formula making machines!!

But then I found out that our new home was in the catchment area for the new NOSH breastfeeding vouchers, and not to sniff at a potential £200, it made me slightly more determined to make breastfeeding work this time.

It all started off brilliantly.  After a much shorted labour (only 6 hours instead of 36) with no drugs this time, Reuben latched straight on and was immediately more interested in feeding than Sam.  I enjoyed the first few days of feeding and milky coma’s (the best thing about breastfeeding a newborn!) but then my right nipple started getting sore again.  I realised that I had what they call an “inverted nipple” where it sticks in rather out, and this was meaning it wasn’t sitting in Reuben’s mouth properly when he was feeding, but instead was rubbing on his palette – probably the same issue I had with Sam.  But this time I was prepared!!  Although I didn’t see a midwife for a few days, I decided to start pumping off the sore side to give it a chance to rest and heal (it was bleeding – never a good sign…).  I continued to feed off the other side, and then Rob would feed Reuben from a bottle whilst I pumped for the next feed.

It was all going swimmingly until I started to get aches and pains in all my muscles, followed by hot flushes and cold chills.  Every time I would wake in the night to feed Reuben I would be a different temperature.  My breast was really hard and painful and the next day it turned bright red.  I booked an appointment with the nurse and she confirmed I had mastitis (yey!!!!).  Seriously painful, and was prescribed antibiotics to clear the infection.  I started to feel much better very quickly, but unfortunately the antibiotics upset Reuben’s little tummy and we had a few days of screaming.

By the end of the antibiotics I had made the decision that I couldn’t put him back on my sore breast – the thought was painful in itself!  So I researched feeding off just one side.  Although it is not “best practice” it could be done! I mean, if you think about it, twins only have one boob each and they do just fine!  Our bodies are made to adjust to whatever life throws at them, so after a few days of my boob catching up with the extra feeds on my good side we were back in business!

I had managed to collect 3 breastfeeding vouchers before Christmas – 2 days, 6 days and 6 weeks – which was a fantastic feeling after having to give up so quickly with Sam.  We had carried on giving Reuben one bottle a day of formula after getting him used to the bottle whilst I was pumping, as it is always helpful to know he will take it in an emergency.  We enjoyed a good 4 months of blissful breastfeeding (you know the kind they show in the adverts where mother gazes lovingly into babies eyes whilst they are feeding…. except most of the time the TV was on or I was checking facebook!) and then we started weaning and the fun began all over again.

With the weaning, I obviously started dropping some milk feeds.  This completely confused my milk supply, and the weekend before I went back to work the familiar feeling of aching muscles returned, followed by cold chills and hot flushes.  Yup, I had mastitis again!!!  My good boob promptly turned bright red and was like a painful stone in my bra.  Annoyingly it was Easter weekend so I had to wait another full day to get an appointment with the doctor for more antibiotics.  My appointment was the afternoon after my first morning back at work, so I had to pretend to be well and happy to be back at work whilst being in immense pain.  My chills got so bad that whilst driving back from meeting my boss my hands turned blue and I walked through the door of my house shaking.  I was so cold that I couldn’t dial the phone to ring our IT department, but by the time I got to the doctors I was sweating!

I was only weeks away from getting my 6 month voucher, so I was determined to keep feeding through the mastitis, after all I had done it once before.  And I succeeded!  I now still feed Reuben once or twice again, but he absolutely loves his food so is enjoying weaning more and more.  I am very glad I got to enjoy the whole breastfeeding journey this time round, it has been so much simpler and easier that having to cart round all the bottle feeding paraphernalia.  But I want to say that all you mums and mums-to-be, please don’t feel guilty or upset as to what your breastfeeding journey turns into.  As long as you feed your baby it is all good.  The end…..